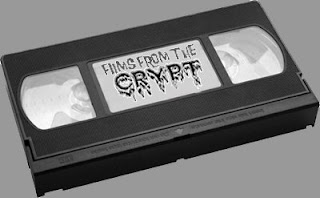 Scheduled to be released in the Summer of 1990, to coincide with Marvel's 50th anniversary, Captain America eventually plumetted to American home video and cable in 1992. If you don't remember the movie, it's for good reason, because it is an entirely forgettable film. It's too bad too, because this one could've been okay. Early, on Ahnold, Dolph Lungdren, and Val Kilmer were up for the role of Cap and they were supposed to get a real budget to turn this thing into a Hollywood blockbuster. Instead, Jack Kirby is rolling over in his grave, giving screenwriter Stephen Tolkin the finger.

The film starts out promisingly enough with a group of Nazis that burst in to an Italian villa and start doling out pain via MP40s. They end up kidnapping wunderkind Tadzio de Santis, after wasting his entire family. After being subjected to Nazi experimentation, Tadzio eventually grows into that ugly menace, The Red Skull. 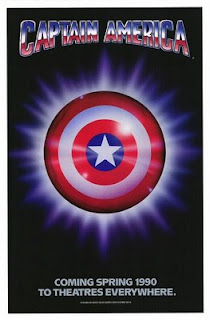 Cut to America where our hero, the young, gimpy Steve Rogers (Matt Salinger - JD's kid!), is gearing up to join a covert US operation that will eventually lead Steve to become the most jingoistic hero of all. He is accepted into the program, and is injected with the super soldier serum, recently imported from Germany. For some reason the governments "secret lab" is inside a diner, and it gets infiltrated by a Nazi spy that kills the only person who knows the formula for the serum, Dr. Maria Vaselli. Dun-dun-dun!

Eventually Cap makes his way to Germany, thwarts the Red Skull, and is sent to Alaska via rocket, where he ends up getting frozen in the ice. Fast-forward to modern day, and ol' Ice Cap is discovered and thawed. After he's unfrozen, he goes to find his long lost love, she gets gunned down by the Red Skull's goons, and decides he has to stop him once and for all!

First of all, let me just go ahead and say it; this movie sucks. It is an absolute train wreck of a film that suffers from bad direction, acting, action, sets, writing, and production value. It would be hard to find another film that had so much potential that ended up being such a waste. The fights are so badly choreographed, it gives old episodes of the Power Rangers some legitimacy and the cinematograper couldn't have been over the age of 12.

Now, let me tell you why you should watch it. Have you ever wanted to see Captain America putter around the streets of Italy in a really tiny car? Ever wonder what any of these new Marvel films would look like if they had a $72 budget? Want to see what JD Salinger's son looks like? You've found your movie. And those are really the best reasons that I could come up for anyone wanting to watch this travesty. Actually, you don't to see a particularly dastardly Darren McGavin, so it's not all bad.

Unfortunately, if you do want to punish yourself and actually watch this thing, it may be easier said that done. As far as I know, the only home video format that Captain America has been released on is VHS. You can probably find it on eBay or Amazon if you want, but I wouldn't pay more than a couple of bucks for it.

*note: pictured is the theatrical teaser poster for the film, it never came to fruition.

"It would be hard to find another film that had so much potential that ended up being such a waste."

I'm not as big of a Crystal Skull hater as you, but I can gurantee that even you would not think it on the same plain of existence of bad as Captain America is.

How could you not hate the Crystal Skull! Didn't you see South Park - they wrapped up my feelings in one nice episode...that movie should have never been made. They BF'd Indie in the ass. In my opinion that movie WAS never made.

And...now I feel like I need to waste time to see just how bad Cap.America really is, thanks - my interest is spiking.