20. Henry Poole Is Here - Not necessarily a wonderful picture, Henry Poole is Here is simply a quiet, small character piece that makes you feel pretty good while watching it. Whil 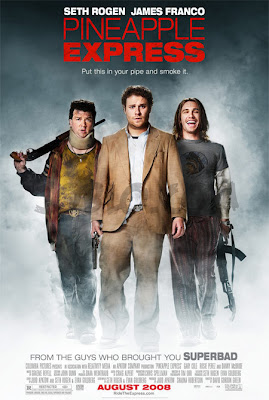 e the movie tries to be probing, you probably won't be sitting around with your buddies talking about this one in a couple of years, but it's a nice fit at number twenty on the list.

19. Cloverfield - A descent, big-little creature feature done with all that shaky cam and what not, but very well, to create a sense of dread. Could have been a lot better (especially if the monster had been Cthuhulu!), but Goddard and Abrams banged out a pretty good little story that kept you wondering...

18. Be Kind Rewind - This quirky little movie almost slipped under the radar, but I didn't forget it. Be Kind Rewind is a feel good movie about a couple of knuckleheads that have to reenact all of their favorite movies. Be prepared for childlike silliness, and goofy goodheartedness

17. Leatherheads - One of the handful of really good romantic comedies to come out in 2008, Leatherheads is directed by the King of Hollywood, George Clooney. Comparing it to O Brother, Where Art Thou? isn't apt, because it's nowhere near that good, but Clooney's character is reminiscent of Everett in that film, which makes it worth a watch.

16. Transsiberian - A taut, Hitchockian thriller from Brad Anderson, Transsiberian really dishes out the suspense. No, it's not Rear Window, but it is a nice bit of film-making from a guy who has really been quietly making a name for himself. Worth a rental, at least.

15. Choke - Based on the third novel from Chuck Palhaniuk, Choke is actually kind of a touching movie. Well, it's also a kind of disgusting movie, but in a touching way. The only complaint I really have is that the film never reaches the level of perversion and indecency that the novel does. I guess that's asking a lot of from a theatrically released film, but it would have given it more bite. As it is, Choke is a quirky, funny rental.

13. Forgetting Sarah Marshall - Another of the truly good romcoms to come out this year, this Jason Segal penned flick hits it on the head. From the awkward first ten minutes, to the Muppet-Dracula finale, you'll be laughing.

12. In Bruges - Two hitmen are on the lam in this Brit/American crime-dramedy. Anchored by a surprisingly strong performance by Colin Farrell, In Bruges is a wonderful little surprise of a movie that I suggest you pick up.

11. RocknRolla - Guy Ritchie is back. And, yes, he is pretty much making the same movie that turned him into the British Tarantino (is that apt, meh), but it works. This taut little bugger keeps you laughing and holding your breath throughout.

10. Redbelt - David Mamet does martial arts? Sign me up. This is actually a really good picture that didn't get much love, and it has Tim Allen with a nice turn as a scumbag leading man.

9. Revolutionary Road - The latest from Sam Mendes (American Beauty) stars wifey Kate Winslett and ultimate leading man Leonardo DiCaprio. It's a delicate picture about a suburbanite couple trying to come to grips with who they are and the tangled web they have woven. Pretty strong stuff.

8. Iron Man - What can I say, they did it right. Downey turns in a great performance (although I still think of Clooney when I think of Tony Stark) and Favreau did a nice job with the source material. This could be a very wonderful, and lucrative, franchise on Marvel's hands.

7. Burn After Reading - Full disclosure, I love the Coen brothers. That said, this ain't the best of the Coens, but it ain't the worst either. It's a fun "wrong man" story that keeps the laughs coming.

6. Pineapple Express - From the Apatow/Rogen team we get another home run. A hilarious stoner/action movie, directed by an arthouse darling? Pretty weird idea. But it works on all levels, far and away being the best comedy of the year.

5. Slumdog Millionaire - A triumph of what must have been a very difficult shoot, Slumdog Millionaire is probably my second favorite Danny Boyle movie. In case you hadn't heard of it, it's a small story in a very big picture, about a young man who wins the Indian version of Who Wants to Be a Millionaire and is then accused of cheating.
4. WALL-E - Definitely Pixar's best since Toy Story, it may be heavy-handed, but WALL-E tickles me in just the right spots. If a bunch of animators can make me feel like a kid again while I'm in the movie theater, they are doing something right.
3. The Dark Knight - Who woulda thunk a comic book movie could be so well made? Lightyears ahead of the previous film, this story-driven drama serves up enough octane to fool you into thinking you just watched an action movie. Sure, the action is there, but that ain't what the movie is about. And that, my friends, is what is so right about this picture.

2. Let The Right One In - Probably the single best vampire movie I've ever seen, LTROI is a wonderful little Swedish masterpiece that is hard to place in the "horror" genre. Sure, it's got a cute little vampire girl(?) in it, but do we automatically throw it in to the horror genre for that reason? Why not. And, if so, welcome to being the best horror movie of the year.

1. The Wrestler - A tour de force performance from Mickey Rourke (as he basically plays himself - substituting wrestling for acting), The Wrestler is the most solid movie I was able to see from 2008. Aronofsky direction is a touching bit of subtle film-making that I've yet to see in his previous work. While it doesn't measure up to my favorite film of last year, No Country, The Wrestler is a wonderful film. Look out Best Actor Oscar, here comes Mickey effing Rourke.

I watched the trailer for Transsiberian. It looks decent enough to d/l and watch.

I watched Cemetery Man today. It was really good.

Yeah, it's pretty good. Me and Ally went and saw it at the Angelika. And, yeah, Dellamorte Dellamore is one of my all time favorites. Great film.