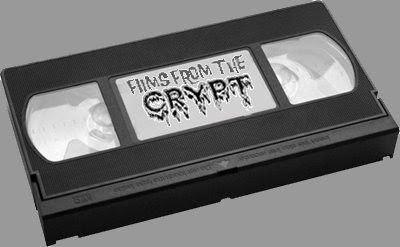 Wes Craven has definitely made very good films, and very bad films in his up and down career. But there is only one that has me so conflicted as to what to think about that I really don't even know whether I like it or not! And, it would appear that I am not the only person that is caught somewhere in the middle with this movie, check out the IMDb rating it's a 4.9.

The film starts out well enough, we find out that there is a maniacal serial killer on the loose that is offing entire families as they sleep via a newscast as delivered by John Tesh! After this, we are introduced to our hero, young Jonathan Parker (Berg), college football player and all around good guy. After suffering a concussion from running into a goalpost, Jonathan has a strange dream in which he witnesses the murder of his adoptive family at the hands of the serial killer (yes, that's right - dreams and a serial killer also figure prominently in another Wes Craven film).When Jonathan wakes up from his nightmare on his street, he finds out that his family actually has been massacred! DUN-NUH-NUH! 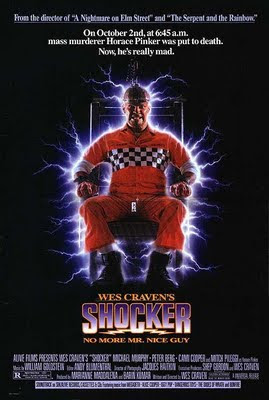 Okay, so, since Jonathan witnessed the murders via his dream, he is able to lead his father (a police officer) to the killer, the one-line-spittin', big-ass-knife-totin' Horace Pinker (played admirably by Walter Skinner himself, Mitch Pillegi). Blah-blah-blah they end up catching Pinker and putting him in the electric chair (evidently the wheels of justice work extra swiftly in this California town). Anyway, unfortunately for everyone involved, Pinker is some sort of practicing warlock or wizard or something and he is able to use a television set to harness some sort of electrical power or some shit. Anyway, long story short, when they electrocute him, Pinker gains the ability to go from body to body (like we'd later see in Fallen - minus the Rolling Stones) and use them for his own purposes.

Anyway you can see where it goes from there. People that Jonathan loves get Pinkerfied, Ted Raimi gets killed (natch), and there's a scene where Jonathan chases Pinker through TV shows. Wait, what? Yeah. That happens. In some weird twist of logic, Wes Craven decided that the best way to end the movie was by having Jonathan and Pinker get in a chase through cable channels (for instance, Jonathan ends up running along side of the Clever family's car). From there it gets even dumber, but I won't ruin that for you. Oh, yeah, and there's some unresolved question on whether Pinker is Jonathan's real father or not. And Jonathan's girfriend comes back from the dead as a protective ghost.

So, as you can see, I'm pretty fuckin' torn about this one. It is so ludicrous that you can't help but have a smile on your face when Mitch Pillegi says stuff like, "Come on, boy, let's take a ride in my Volts Wagon". Wow. It's like if they took The Indestructible Man and mixed it with a one of the latter day Nightmare on Elm St. films that have Freddy trying to act like he's Buddy Hackett.

Anyway, if you haven't seen it, then I would actually recommend that you take a look at it and try to determine for yourself. At the very least, it's worth watching for the soundtrack. The Dudes of Wrath are: Paul Stanley and producer Desmond Child both on vocals, Def Leppard's Vivian Campbell and Guy Mann-Dude on guitars, Whitesnake's Rudy Sarzo on bass guitar, and Mötley Crüe's Tommy Lee on drums. Also backing vocals by Van Halen bassist Michael Anthony & Kane Roberts. Hellz yeah.

Underrated film. This one has always held a special place in my heart. Come on - Ted Raimi, Peter Berg, Mitch, I think Langenkamp is even in it for a bit. This horror film has a little of everything especially in the plot department: slasher, resurrection, possession, and even life through electricity.

Funny thing is that every time I went to Sharper Image and got into one of those massage chairs after seeing this film, I would always think of the chair's arms gripping me. =)

hmmmm...not enough for me to sit down and watch. But good review!

Geof, I don't know that I agree that it is underrated, but I know where you are coming from. It is a somewhat "special" film that can't be put in a normal box.

As far as Heather Langenkamp, she's in the credits (like second in order of appearance) as victim...but I never saw her. She may be in a still image or small video clip in the montage at the beginning of the film where it is showing the stuff from the news.

And beware of the massage chair!

To UARK, thanks for the compliment! Maybe watch it one day if you get bored on a stormy eve or something. You probably won't want to go out of your way to.

i remember being in my early teens when this came out and being sort of disappointed when it was over. i didn't hate it but i distinctly remember say "get the f*ck out of here." out loud while watching this in theatre and the lady behind me saying "right? this is retarded."

i think it all boils down to why does Horace Pinker (great name by the way) have these powers? that's a plot point that might have made the movie better if it were explained better.

now i have to re watch this and give it a 2nd chance. well played and well reviewed as usual Warfreak.

Before Fallen AND before The Hidden!

Actually, I think it was after The Hidden.

This movie was silly.....but somewhat entertaining as well.