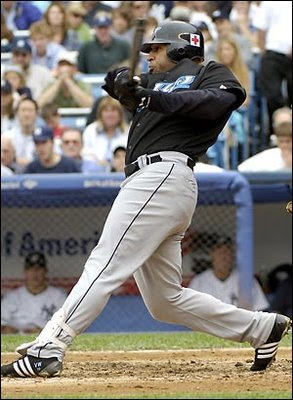 With baseball season being over, I am grasping at straws to keep some semblance the game around for the winter months. Basically that just means talking about it as much as possible. Luckily they are still doing all the award announcing so that keeps it fresh. But, this post is about something that Pop Newmo and I talked about a little while ago. We all know that there aren't very many Captains in baseball anymore. There are three, to be exact, Jeter, Konerko, and Varitek. We all understand with the volatility of the market how hard it is to keep a guy in your city for long enough to make them captain, but this is a list of guys that deserve to wear the C on their uniform.

10. Khalil Greene - San Diego Padres - Khalil is going into his sixth season with the Padres this coming season, his numbers aren't necessarily there, but clubhouse presence has to count for a lot. Plus how many other players are going to actually stick around in San Diego?

9. Jimmy Rollins - Philadelphia Phillies - Jimmy has been with the team eight years, just earned himself a ring, and is all around a phenomenal baseball player. I think he gets it by default.

8.Derek Lee - Chicago Cubs - Lee may not be a lifer, but he's been with the Cubbies for five seasons now, and he is arguably the most valuable player on that team. With a career line that looks like a .282 avg, 1538 hits, 258 homeruns, and 828 (not too mention gold glove defense), I'd take him as my captain.

7.Carl Crawford - Tampa Bay Rays - He's been with the team since their inception (seven years ago) and has consistently been very good. He's a career .292 hitter with 302 stolen bases and 1111 hits. Not too shabby.

6. Justin Morneau - Minnesota Twins - This Canuck has been with the Twins for five seasons now, and hits .281 for his career with 133 dingers. Not just super impressive, but pretty good, especially in comparisson with the rest of his team. Now, if we give Mauer a few more seasons, he may usurp this mantle, but I'd give it to Morneau right now.

5. Vernon Wells - Toronto Blue Jays - This coming season will make one decade with the Jays for Wells, and he has strung out some decent numbers during his duration. He's a career .283 hitter (actually posting .300 this season!) with 1204 hits and 177 homers. Not shabby, and definitely the Blue Jay with the most longevity.

4. Lance Berkman - Houston Astros - Definitely the brightest spot on the Astros squad, Berkman has been with the 'stros for a decade, and really seems to just be getting better.

3. Michael Young - Texas Rangers - Again, his tenure isn't really there, but he is one of the oldest guys on the team (at 32) and we have him locked up for a longgg time. Plus, he's a really good, old school style ballplayer. Got his first Gold Glove this year to boot!

2. Albert Pujols - St. Louis Cardinals - He may not be tenured enough quite yet, but being the best baseball player on the planet has to count for something. Is he a Cards lifer? Only time will tell. Oh yeah, and congrats on another MVP as well!

1. Chipper Jones - Atlanta Braves - He's the best player on the team, and has been for years and years. I really don't think he's going anywhere.

I'd have to agree on most levels here.

I MIGHT say Peavy or Mike Cameron gets the C for the Padres.

Rollins should have had the title 2 years ago, I don't care that he was young. He's the reason that team has a ring.

Morneau. MVP. Enough said. Guys should look up to him if they don't.

Why isn't Berkman the captain? He's not going anywhere. He's the backbone of the team.

PLEASE READ NOLAN RYAN. Your captain is a freaking horse. No respectable team has ever had a mascot be the captain. Not even a cheerleading squad. Michael Young has to be the captain. I could go on.

Chipper Jones should have been the captain of the Braves in 1999.

After reading this, I realized there really needs to be more captains in baseball. I'm mad now.

Oh, and the captain for the Brewers needs to be Bob Uecker.